So we’re introducing a new segment called Thursday Throwback.  This weeks Thursday Throwback I’m dusting off the old Sega CD (well actually opening up my emulator) and playing one of my favorite games from back in the day called Snatcher!

Snatcher is a cyberpunk-themed graphic adventure game directed and written by Hideo Kojima and produced by Konami. It was originally released in Japan for the NEC PC-8801 and MSX2 computer platforms in 1988. A CD-ROM-based remake for the PC Engine was released in 1992, which was subsequently localized into English for the Mega CD/Sega CD in 1994 in North America and Europe. The enhanced version was later ported twice more to the PlayStation and Sega Saturn in Japan.

The setting and story of Snatcher is heavily influenced by cyberpunk and science-fiction media, taking place in a large futuristic dystopian city. The story revolves around an investigator named Gillian Seed assigned to investigate a breed of bioroids known as “snatchers”, who are killing humans and taking their place in society. Gameplay takes place in from a first-person perspective in a menu-based interface. The player can choose from pre-defined options such as “Look” and “Talk” to interact with the environment and its characters. On June 6, 1996 (1991 in the Japanese versions), a biological weapon known as Lucifer-Alpha under development in Chernoton, Russia, is released into the atmosphere, resulting in the death of 80% of the Eurasian population which in turn results in the death of half of the world’s population. The contaminated area becomes uninhabitable for a decade, when Lucifer-Alpha mutates into a non-lethal form. This tragic event later becomes known as “the Catastrophe”.

Fifty years later, in 2047 (2042 in the Japanese versions), a breed of artificial life-forms or bioroids, which pretty much look like the exoskeleton Terminators, known as “snatchers” began appearing in the artificial island of Neo Kobe City, killing their victims and taking their place in society. Nobody knows exactly what they are or where they come from. As Gillian Seed, an amnesiac working for an Anti-Snatcher task force called J.U.N.K.E.R., the player’s goal is to track down the source of the snatchers and discover Gillian’s mysterious connections with them.

Several changes were made to conform with the different censorship standards outside Japan, mainly due to sexual content: Katrina’s age was changed from 14 in the Japanese version to 18 in the English version due to a nude shower scene she has in the game, and the exposed breast of a dead Snatcher was covered up.  A scene featured in the PC Engine version, which depicts a dying dog twitching with its internal organs exposed was redone so the dog is no longer twitching. The clientele at the Outer Heaven night club, which were originally parodies of popular sci-fi characters such as Kamen Rider and Cornelius, were changed to Konami-owned characters to avoid any potential copyright infringement and certain locations (such as the Joy Division mask shop) were renamed for similar reasons. The naked Snatchers were also redesigned to lessen the resemblance with the Terminator robot: their endoskeletons were repainted with olive-colored body parts and their eyes were changed from red to green, besides other minimal graphic changes. One minor plot change was made to Jean Jack Gibson’s last meal in the English version: his final meal was originally whale meat, which was changed to buffalo meat for the localization. Because of the later release of the English version, the year of the Catastrophe was changed from 1991 to 1996 and all other dates in the games were moved accordingly by five years – thus, the present year of the game’s story was ultimately changed from 2042 to 2047.

The Sega CD version adds an extended opening intro (adapted from the introductory manga story featured in the manual) and Act 3 was revised to allow more interaction with the player, such as a series of shooting sequences just before Gillian’s encounter with Elijah Modnar. The ending is extended with the addition of Katrina and Mika in the final scene, as well as a cameo from Napoleon.

According to Blaustein, the Sega CD version of Snatcher only sold a “couple of thousand units” in North America. He attributes the game’s commercial failure due to Sega’s discontinuation of the add-on at the time of the game’s release.

Snatcher is widely regarded as groundbreaking for the adventure genre, in that it introduced visual novel characteristics to flesh out a deep back story. Sales outside Japan were poor due to Sega’s waning support for the Sega CD, but the game has gained a cult following. 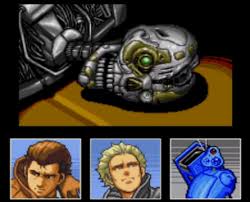 Snatcher has been critically acclaimed by reviewers. Famitsu gave the PC Engine version a score of 33 out of 40. Upon release of the Sega CD version, GameFan magazine gave it scores of 90, 100, and 90, with one reviewer praising it for “new shooting sequences, perfect voice acting, rockin’ art, incredible music, and the most involving videogame storyline ever” while another reviewer praised it for “ungodly carnage, the greatest story ever, and the interface that is just the coolest”. Electronic Gaming Monthly gave the Sega CD version scores of 9, 9, 7, 8, and 9, commenting positively on the graphics and the intricacy of the storyline; the reviewer Dano concluded that it is a “top-notch Sega CD title.”

Mean Machines Sega described it as “a breathtakingly detailed game which is so full of nice touches and extras that going about your everyday Junker duties becomes as enjoyable as hunting down the Snatcher units” and rated it as one of their “top three Mega CD games of all-time”. The February 1995 issue of GamePro, while critical of the linear quest, simplistic combat, and “conservative and old-fashioned” music, summarized the game as a “smart-looking, lengthy, interactive graphic adventure”, making particular note of the intellectually stimulating investigations, compelling graphics, and strong cyberpunk storyline; the reviewer Toxic Tommy concluded that it is “a cool science fiction CD saga that rewards patience, persistence, and plodding.” Future Publishing’s Ultimate Future Games described it as a “compelling” game with a “big, entertaining story” but criticized “some sections” for moving “slowly”. Next Generation gave it a mixed review, describing it as “mildly ground breaking” for the Sega CD but criticizing its mixture of “mature character relationships” with “strained comic relief” and aspects of the voice acting and interface.

Retrospective reviews have also been positive. Electronic Gaming Monthly ranked it number 69 in their top 100 “Best Games of All Time” list in 1997, and described it as “an awesome cyberpunk adventure game” in 1999. In 2005, 1UP praised Snatcher for being an ambitious cyberpunk detective novel graphic adventure that pushed the boundaries of video game storytelling, cinematic cut scenes and mature content in its time. Kurt Kalata of Gamasutra and Hardcore Gaming 101 praised the game for its graphics, soundtrack, high quality writing comparable to a novel, voice acting comparable to a film or radio drama, post-apocalyptic science fiction setting, light gun shooter segments, and in-game computer database with optional documents that flesh out the game world, though not its use of the amnesia theme. According to Kalata, the Sega CD version of Snatcher was for a long time the only major visual novel game to be released in America, where it gained a cult following. Retro Gamer included the Mega CD version among the top ten games on the platform, describing Snatcher as “the ultimate interactive movie.”

RPGFan gave the game scores of 95% and 97%, praising it for its “amazing story line,” every character’s “superb development and revelations,” the “twists and turns in the plot,” and the game’s ending. Niall MacDonald of Console Obsession gave the game a score of 9/10, praising it for its “solid game world” as well as “excellent story, stylised visuals and deep concepts.” He recommended the game to fans of film noir and cyberpunk, concluding that it is “not just an excellent interactive movie, but an example of gaming at its finest.”

This game influenced me so much that I made a senior project for my creative writing class with my cousin and I based in the Snatcher universe.  I got an “A”…lol.  If you’ve never played this game before, do yourself a justice and give it a spin.  There are a lot of copies available to buy online and there are very good and stable emulators that can play it fine on even your more powerful machines.  Now if you’ll excuse me, Metal Gear Mk. II and I need to stop the bioroid outbreak before dinner.