A spokesperson for France’s Interior Ministry said on Twitter: “The individual who was driving the truck was neutralized. Investigation will determine if he was acting alone.” Police urged residents to stay in their homes.

Estrosi, president of the Provence-Alpes-Côte-d’Azur region that includes Nice, told French media that the driver also shot at people and was fatally shot by police. A senior U.S. military official told reporters that guns and explosives were found in the truck.

“White truck literally racing through crowds of all ages. People either caught in path or forced to jump onto rocks over beach barrier,” witness Andrew Botros, an Edinburgh man who owns a holiday apartment in Nice, told NBC News in a Twitter message. “Some dead. Horrific,” Botros said. 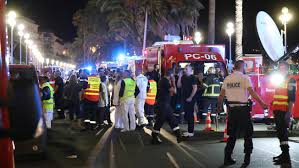 A senior U.S. military source told NBC News that French authorities are reporting that the truck “purposefully” and “maliciously” struck the crowd.

French President Francois Hollande and the country’s interior minister were holding a crisis meeting over the situation. The Interior Ministry said a catastrophe and disaster response plan was being implemented. U.S. President Barack Obama has been briefed on the situation, National Security Council spokesperson said.

Witnesses described the chaos after the truck hit the crowd.

“I looked up and saw, like, a tsunami wave of people just running towards me as fast as they possibly could screaming at the top of their lungs,” Dr. Kevin Motamedi, a Denver physician on a tour of Europe, told reporters. “And I just grabbed who I was with and started running as fast as possible. It was basically just complete mass hysteria.”

“It was the scariest moment of my life, easily,” Motamedi said. “As we were running, you could tell the people in front of us had no idea that anything was going on, so we were running and grabbing people saying, ‘Run. Go home!'”

Eric Dratell, an American lawyer working in London, is in Nice on vacation with his wife. They were having dinner at Le Sporting on the beach when his wife heard what she thought was gunfire. 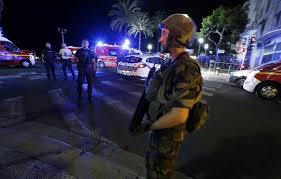 “We started running for cover. People started jumping from promenade level onto the beach,” Dratell told reporters. “A guy jumped on my wife,” who was injured, he said.

“We took shelter with 200 or more people in an area under the promenade. People were in crowded toilet stalls,” Dratell said. “This is shocking,” he said.

Following the incident, Nice’s former mayor Christian Estrosi tweeted in French, “Dear Nicois, the driver of a truck appears to have made a dozens of deaths. For the moment, stay in your home. More info to come.”

France has been on edge since a series of coordinated terror attacks in Paris in November that left 130 people dead. The terror group ISIS claimed responsibility for that attack.

Obama condemned “what appears to be a horrific terrorist attack” and said the U.S. is prepared to offer France assistance if needed.

“Our thoughts and prayers are with the families and other loved ones of those killed, and we wish a full recovery for the many wounded,” Obama said in a statement. “We stand in solidarity and partnership with France, our oldest ally, as they respond to and recover from this attack,” Obama said.

There were no immediate claims of responsibility by ISIS through its official or unofficial channels, according to Flashpoint Intelligence, an international terrorism research organization. 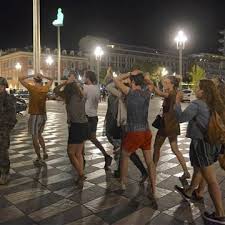 France’s ambassador to the U.S., Gérard Araud, said on Twitter: “Again. Sadness. These people only wanted to enjoy Bastille day fireworks with their family and friends. Sadness.”  Canadian Prime Minister Justin Trudeau said: “Canadians are shocked by tonight’s attack in Nice. Our sympathy is with the victims, and our solidarity with the French people.”  Nice is a city on France’s Mediterranean coast popular with tourists. The U.S. State Department said it has no Thursday evening it had no information that any Americans were killed or injured.

Bastille Day, also known as National Day, commemorates the storming of the Bastille prison during the French revolution in 1789.

“On this Bastille Day, we are reminded of the extraordinary resilience and democratic values that have made France an inspiration to the entire world, and we know that the character of the French Republic will endure long after this devastating and tragic loss of life,” Obama said.

The only thing that comes to mind is that the French people are still trying to get over the horrible terrorist attacks not that long ago and now this happens.  It’s hard to imagine what they must be feeling right now; with more and more of these terrorist and ideological attacks against not just America but now multiple places across the world, I think that this political battles need to be put to the side and a unified attempt to stop ISIS needs to start coming into play.