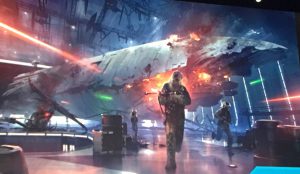 To tell you how unbelievably excited I am about this announcement would be one of the biggest understatements of the year.  At the final panel of Saturday’s Star Wars Celebration Europe main stage, EA Games came to talk about all of their upcoming Star Wars video games – but about the current one, as well. Star Wars Battlefront had the stage for talk about the upcoming DLC, as two more packs are still coming as part of the season pass.

Friday night, they announced that fans can play in a single player offline mode called “Skirmish,” with bots instead of other humans both on their side and against them. That’s coming as free DLC this coming Wednesday for all owners of the game.

The third paid expansion pack, the Death Star pack, debuted a new teaser trailer which can be seen above, featuring the trench run, fully playable – to much applause at Celebration. The Death Star pack will include two new heroes, as usual, with Bossk coming on the villains side, and Chewbacca on the heroes side. That’s coming in the still-nebulous “Fall 2016.” (Insert Darth Vader’s “NNNOOOOOOOOOOOO” here) 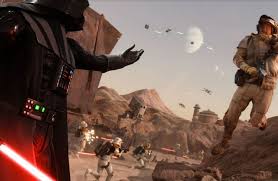 The fourth expansion pack remains unannounced, though they did remind fans that a fourth one is coming before they look to the future of the franchise with the already-announced sequel in development.

Star Wars Battlefront is available now on all modern platforms.